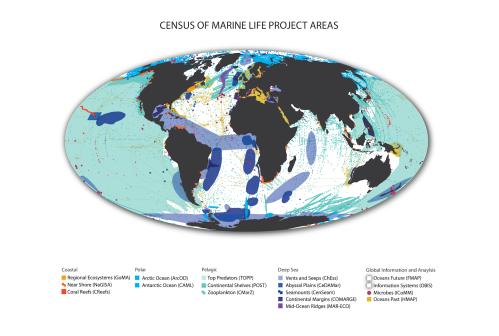 TIme to nerd out and see what the ocean has been up to the last 10 years!

This is the first time that anything to this magnitude has taken place. It is a real example of exploration today and how the concepts of how we can gather this data have changed and how somethings are the same. The quick passages below explain the mission of the census, the volume of biodiversity in the ocean and how many new species have been found, and how technology has exponentially magnified the amount of results that scientists can achieve.

“The Census of Marine Life is a global network of researchers in more than 80 nations engaged in a 10-year scientific initiative to assess and explain the diversity, distribution, and abundance of life in the oceans.  The world’s first comprehensive census of the past, present, and future of life in the oceans.

Biodiversity is one potential measure of the health of an ecosystem. A diverse biological community allows for diverse interactions among the various species— greater competition, predation, and productivity than a non-diverse community. If one species population declines, a diverse system has a greater chance of adjusting to this loss or decline than one that is non-diverse, where the consequences are greater.

Although the current number of known species is estimated at 230,000, scientists believe that there as many as three times this number are yet to be discovered and named. The total number of marine species in the global ocean could surpass one million or more.

How many new species have been discovered?

As of fall 2008, the Census of Marine Life has discovered more than 5,300 new, undescribed marine animals since 2003. Of these, 111 have gone through the rigorous scientific review process required for designation as a new species—a process that can often take years. Collectively, the Census is discovering new species at a much faster rate than the capacity to describe them.

While the discovery of a new species is always exciting, the greater contribution to our understanding of marine life is what Census scientists are learning about the diversity and distribution of marine life in the global oceans.

How is technology being used?

Recent technological advances are making it possible for scientists to explore previously inaccessible places, including the deepest, darkest, and hottest areas of the global ocean. Using such advanced technology, Census scientists are making many scientific “firsts,” such as finding the hottest hydrothermal vent and the deepest active hot vent to date, mapping the largest cold seep site in the world, recording the longest electronically-recorded migration, and investigating marine life living in some of the coldest conditions on the planet.

Census scientists use marine animals as ocean observers so they experience their watery world much as the animals do. By tagging and tracking marine animals, scientists gain an insider’s view to migration routes, breeding and eating habits, and size and behavior of populations—insights that haven’t been possible before.” – http://www.coml.org/ There is all kinds of information waiting to be unlocked on their website.

All I can say is, we’ve come a long way since sails and crows nests.

Another cool site to check out: